Fav Bro Paul, caught a big one yesterday. Please excuse the “eff bombs” from the fish.

Time for another Halloween Happy Hour at Jack & Linda’s

Paul scored a goal, but Colin’s team won in a shoot-out 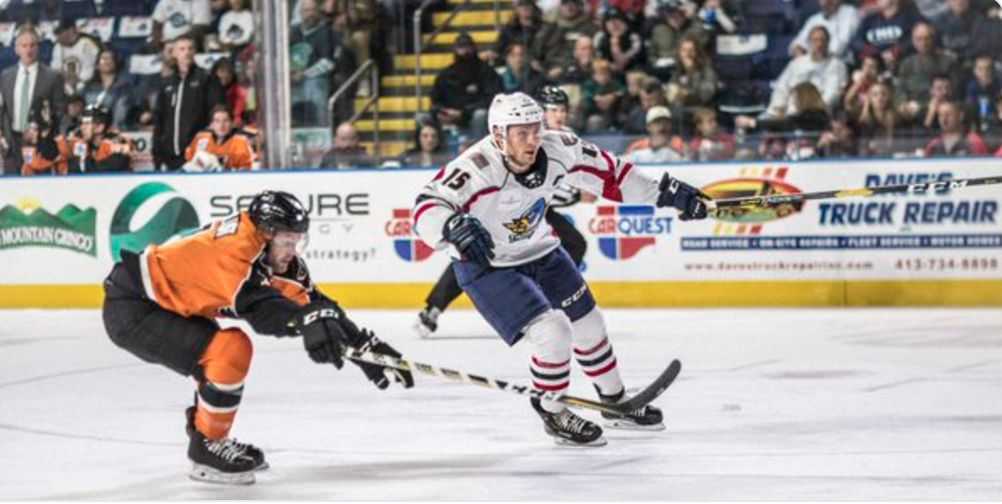 Jack and Faith’s Happy Hour to celebrate their Engagement in Ocean Bluff Ma. on August 18, 2018. 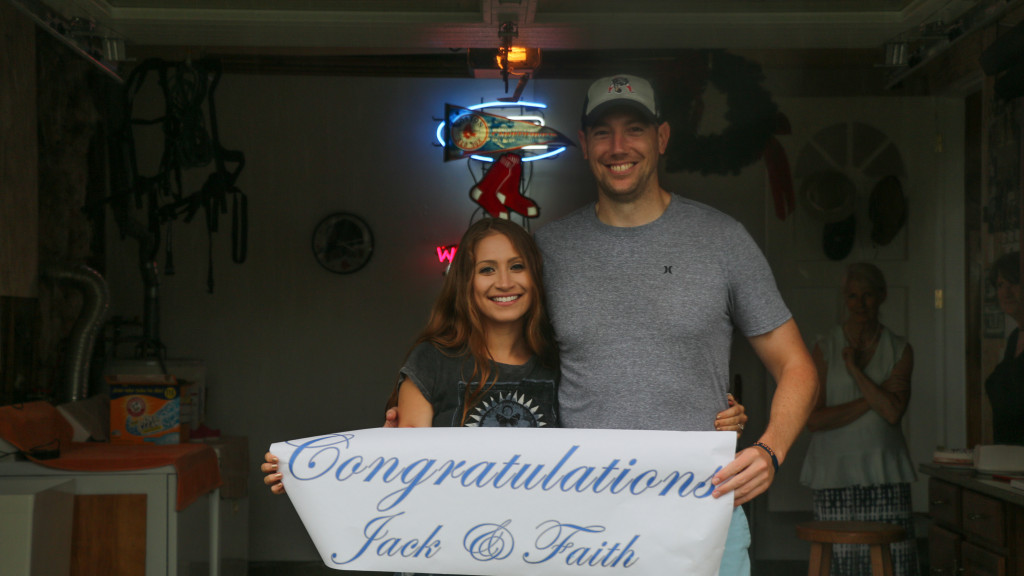 All had a blast at Mark’s Surprise 40th birthday party in Pembroke, Ma. 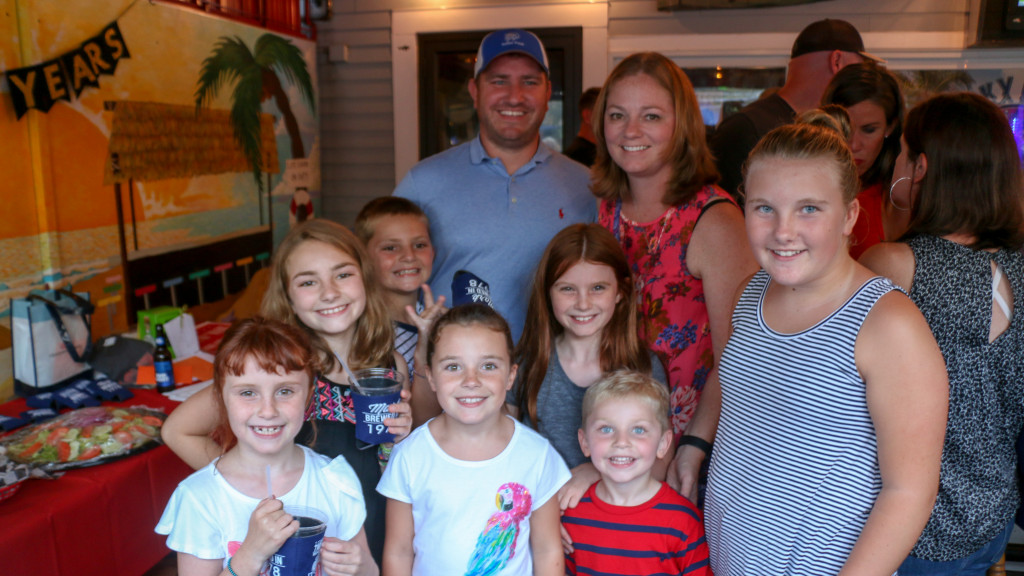 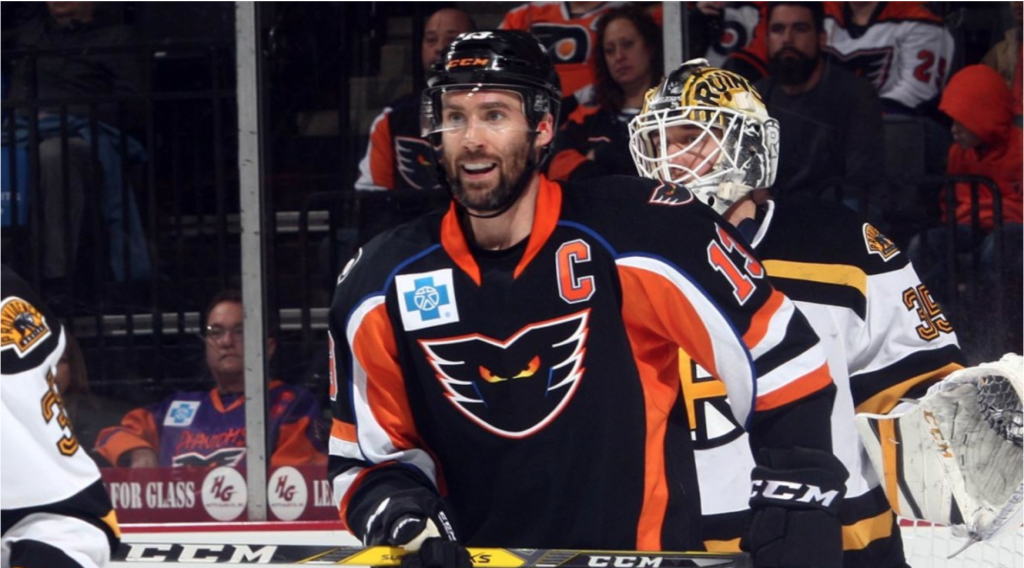 Jack & Linda McDonald invite David’s family & friends for a Happy Hour (not a surprise) to celebrate David’s 30th Birthday. Your presence is the best present. Alex Krushelnyski Scores at 1:09 a.m. in the 5th Overtime

Charlotte, N.C. – Alex Krushelnyski scored at 6:48 into the fifth overtime finally ending the longest game in the 82-year history of the American Hockey League at 1:09 a.m. capping an incredible night (and early morning) of hockey in Charlotte. Colin McDonald won the puck in the right corner and connected with an open Cole Bardreau behind the net who found Krushlenyski open in the slot for the one-timer past the blocker of Alex Nedeljkovic thus triggering an exuberant celebration from the overjoyed Phantoms.

Alex Lyon recorded 94 saves on 95 shots which was the second-most in AHL history. The Phantoms took a 3 games to 1 lead in the series. And both of the drained teams are certainly happy that there are two days off before Game 5 of the series on Saturday night at 6:00 p.m. in Charlotte.

Counting down to 17:01 left in the 5th overtime, the fans who remained at Bojangles’ Coliseum let out a loud cheer. Many in the building clearly were well-aware that it was at that very instant that the two teams had passed the record for the longest game in AHL history. The total time for the game was six hours and six minutes. Only three NHL games have gone longer than the new longest-ever AHL marathon. Lyon’s 94 saves included an amazing 79 consecutive stops over the final 119:56 of the game following Charlotte’s tying goal by Patrick Brown at 6:52 of the second period. Danick Martel had scored in the first period for Lehigh Valley.

The Phantoms played the bulk of the game with only five defenseman after Samuel Morin left with a lower-body injury in the first period following a check into the boards from Brown.

On April 24, 2008, the Philadelphia Phantoms defeated the Albany River Rats at 2:58 into the 5th overtime on a game-winner by Ryan Potulny in what was previously the longest game in AHL history on a record-setting night that many thought would never be broken. Michael Leighton of Albany made 98 saves in the losing cause. Those two teams were also the affiliates of the Philadelphia Flyers and Carolina Hurricanes just like this one. The pace was understandably significantly slower as the game continued on past 11:00 p.m. and then eventually past midnight on one of the most incredible nights of hockey that any of the participants will likely ever be involved in.

Charlotte out shot the Phantoms 95-53. Both teams were 0-for-3 on the power play. Lehigh Valley can clinch the series with a victory on Saturday night at Charlotte and would then advance to the Eastern Conference Finals to tangle with the Toronto Marlies. If the Charlotte Checkers survive in the fifth game and force a Game 6 then that would take place in Allentown on Monday evening.

In the midst of the club’s 12th postseason appearance in franchise history, the Phantoms have captured two Calder Cup Championships (1998, 2005) and carry a 62-54 overall mark in 116 career AHL postseason outings. This is the fifth regular season division title in franchise history and the team’s first since arriving in the Lehigh Valley.

Playoff strips, 10-game flex packs and single game playoff tickets to the 2018 Calder Cup Playoffs are all on sale now!

Another great day in Brant Rock! 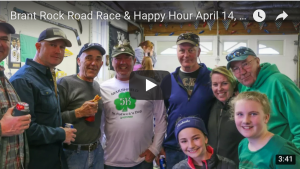