↓
Home Menu ↓
Skip to primary content
Skip to secondary content
Home→McDonaldMorgans→Invitation→Colin Plays in AHL All-Star Game, Then gets called back to NHL’s Penquins 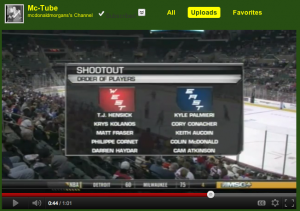 The Penguins have recalled forward Colin McDonald from Wilkes-Barre/Scranton of the American Hockey League.

McDonald has appeared in two NHL games this season and has not scored a point.

In 41 AHL games, he is Wilkes-Barre/Scranton’s leading scorer with 38 points (26 goals, 12 assists). He participated in the AHL’s all-star game in Atlantic City, N.J. Monday night.

McDonald, 25, was a free-agent signing this past summer.

Congrats to Colin! Colin played and the 2012 AHL All-Star Game on January 30, 2012 at historic Boardwalk Hall in Atlantic City, NJ.